Posted by michiganauctioneer on December 27, 2013 in The Auction Process | 1 Comment 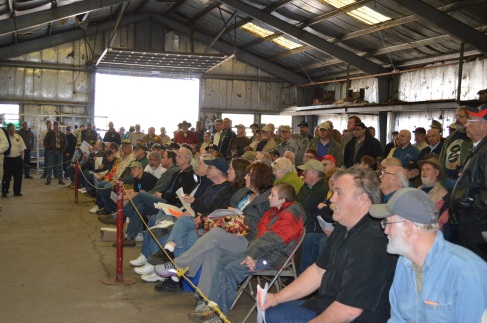 Over 1,000 folks were in attendance for the famous military museum auction in Dundee, Michigan. Auction is expected to win Michigan Auction of the Year in 2013.

DUNDEE, Mich. Kenny Lindsay of American Eagle Auction & Appraisal Company had the privilege of presenting the amazing collection of military vehicles, military memorabilia and equipment that Michael Yeck had amassed over the past twenty-some years. With American Military history on the auction block, this auction certainly qualifies to be the Auction of the Year.

This auction not only generated interest throughout the United States but inquiries were received from interested parties in Canada, Europe, and Lindsay even received a call from and interested party in New Zealand. At the peak of the auction there were at least 2,000 people in attendance; some had come to obtain items for their collections; others were there to take advantage of the opportunity to see a part of American history; others were there because they knew and admired Michael Yeck.  Some streets were closed and some were one-way only. Because of the limited parking arrangements had been made for shuttle service from the distant parking areas to the museum.

After volunteering for the Selective Service in 1940, Yeck served in the Army during World War II and participated in the D-Day invasion of Normandy. It was in 1989, after returning to France for the commemoration of the 45th anniversary of that invasion that Yeck’s interest in preserving military history was born. He continually added to his collection and his knowledge of military history. He was known to take his vehicles to reunions and re-enactments even taking some to Normandy, France. Now, this amazing collection of vehicles, pictures, tools, etc., etc. was on the auction block providing the opportunity for any interested person to obtain a piece of history. It could have been as small as an old canteen, as practical as one of the tools, an old picture of a hero from one of the wars, or something as large as one of the large trucks, jeeps, or motorcycles.

The preparation for this auction required many hands and many hours according to Kenny Lindsay.  He said, “The preparation for this auction was enormous. For four months, our auction team worked 8-10 hours a day, 3-4 days a week – every week. We sifted, sorted, cleaned, grouped, documented, photographed, staged and displayed well over 10,000 individual items to prepare for this auction event. We had a total of three different auctions with the first being The Super Auction. The Super Auction was instrumental with getting the word out to promote the big military vehicles and military memorabilia auction which we dubbed as ‘The Grand Finale’. The week prior, we had an auction to clear out general shop and tool equipment so we could make room for The Grand Finale – even the tool and equipment auction was wildly successful.”

A total of 37 vehicles, 32 of which were military vehicles, crossed the block. All of the vehicles were museum pieces and not in running condition. The first one to cross the block was a 1920 Chevrolet 420 sedan that sold for $6,100. Immediately following this car there was a 1916 Buick D-45 touring car that also sold for $6,100.

The next four non-military vehicles were all made by Ford. The first to be sold was a 1913 Ford Model T that sold for $4,900 and then a 1929 Ford Model A Fordor sedan crossed the block for $6,800. This vehicle had been garage-kept; it appeared to be mechanically sound but had not been run since 1984. A 1926 Ford Model T four-door Touring sedan with a rebuilt engine and transmission which had also been kept in a garage appeared to be mechanically sound but was not running sold for $5,800; and a 1923 Ford Model TT stake truck saw a final bid of $4,675.

Then, it was on to the military vehicles – the items for which many were there. One of the most desirable was a 1945 White M16 multi-gun carrier. This item had a gun turret, a siren, gas cans, axe, and stretcher as it would have had when in use. It appeared to be mechanically sound and sold for $20,400.

Motorcycles were used by the U.S. Army for police and escort work, courier duties, and in a limited capacity to transport some equipment. The 1942 Harley-Davidson ‘Liberator’ motorcycle with its original Goulding sidecar, leather saddlebags, rifle with its holster, and a leg armor strap for the driver saw a final bid of $21,000. The nickname of ‘Liberator’ for these motorcycles was acquired when it was seen being ridden by soldiers liberating occupied Europe.

One would need a considerable amount of room for the 1943 Studebaker tracked Weasel. This very large piece sold for $19,500. This item appeared to be mechanically sound. It had been repainted, had side curtains and a folding top. This had been kept in the garage and the engine and transmission had been replaced.

Other vehicles that were very important in the War effort were the trucks. Some were used for carrying equipment and supplies; others were used to transport troops. In Kalamazoo, Mich. during the early 1940s it was a common sight to see long convoys of these trucks transporting troops from Fort Custer in nearby Augusta, Mich. to training grounds on the west side of the state. A 1954 Dodge 3/4-ton stake truck used for cargo sold for $3,300; a 1953 Dodge truck earned $3,575; a Chevrolet stake-bed cargo truck from 1942 saw $5,610; and a Dodge pickup from 1941 crossed the block for $8,250. A 1940 Ford T16 Universal carrier saw a final bid of $18,700.

For those who were did not have the room nor the inclination to procure one of the large vehicles there was an ample opportunity for them to obtain a smaller piece of history. For the gun enthusiast there were several desirable pieces. A demilitarized Bren gun with a bipod found several interested buyers and crossed the block for $900. A British Piat anti-tank gun sold for $700; a Model 39 from the Hamilton Rifle Co. earned $325; and a Quackenbush .22 rifle crossed the block for $350.

Other rifle examples included: an 1807 Springfield musket that sold for $425; a Joseph Golcher percussion cap musket that saw $300; a CH Beach percussion cap with a side hammer that had been made in Marshall, Mich. earned $425; and a Tower of London flintlock musket crossed the block for $325.

Other smaller items included: military tools, belts and buckles, cap and hats, ammo belts, and ammo, and the list could go on and on. Found among these items were those from the Civil War to those from Vietnam. It is impossible to list all 10,000-plus items that were found in this auction.

At the end of the day everyone was tired but happy. Kenny Lindsay enlisted auctioneers Scott Vander Kolk, Peter Gehres, Brad Stoecker, Garth Wilber, David Helmer, and the Dundee Police Department to assist at this auction. Kenny’s comment after the auction summed it up: “The entire auction industry scored a point as a result of this high profile auction. Most importantly, our seller and the family was ecstatic with the process and the end result.”

All prices quoted are the hammer price and do not include the buyer’s premium. For additional information contact the auctioneer at: (248) 473-1547 or by email at productionline@msn.com. Also, check out his website at http://www.MichiganAuctionCompany.com

← War Heroes To Sports Heroes. The Super Auction Lives Up To Its Name Auctions Will Be The Second Epidemic →